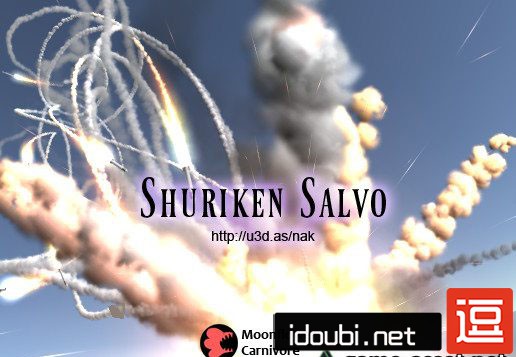 Shuriken Salvo is a gorgeous and easy-to-use Shuriken particle effect library to create looping attack effects of swarm of magical beams or missiles, traveling spirally and leaving trails behind which are both easily adjustable.This asset contains 10 kinds of effect (fire, ice, lightning, wind, water, holy, darkness, arcane arrow, recovery, revive, meteorite, missile and shuriken) in “homing”, “swarm” and “single projectile” versions. Every elemental and missile effect has 2 “power tier” versions. All effects also have mobile-optimized variants.• Homing version is placed at the attacker and requires assigning a target. This allows each projectile to chase after the target even when either side moves. The particle homing script allows assigning multiple targets, adjustment of homing speed, delay before beginning guidance and choosing between 2 target selection modes: random and closest. The script will work with any Shuriken particle effect beyond this asset with right setup detailed in the documentation.• Swarm version only needs to be placed at the target’s object and then the projectiles will be shooting afar on the target and trigger explosion. The pseudo-homing behavior does not require homing script but each projectile does not chase after the target either when it moves.• Single projectile version allows you to control the movement of each projectile directly and it will trigger blasting effect upon collision.Custom shader is included for simulating easy billboard raymarching smoke particles which react to the rotation, color and intensity of the directional light and ambient light in real-time. This can be seen in the desktop version of meteorite and missile 2 effects.
Asset version: 1.02
https://assetstore.unity.com/packages/vfx/particles/spells/shuriken-salvo-52746