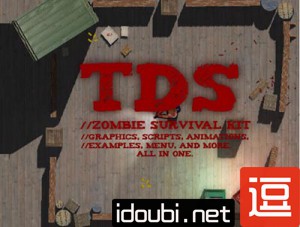 What is TDS Zombie Survival Kit?
Ever wanted to create your own TDS Zombie survival game? Have you ever wanted to create something like “Survive wave of zombies’ game”? Something like a “Defend Survival”? Or just any “Survival Zombie game”? Then try this out!
This package contains loads of models, items, graphics and scripts both JS and C# which was made for those who are new and want to learn more on how to create a TDS Zombie Survival but don’t know where to start! It provides you with simple codes, models, animations, menu, textures and everything to start your own game! Including 3 example projects and game modes. You can simple drag and drop the scripts, learn from them and drag prefabs to create your own game or just edit the example scenes!
This pack includes;
– Fully animated, scripted, survival character with Footsteps, Sprint, Sounds, Flashlight, Laser and more!
– 3 different zombies which can push creates, climb barricades, chase and attack the player!
– 3 Type of game mode and example projects.
– Fully animated menu which can be customized!
– Customizable Crosshair Including 7 Crosshairs to choice from!
– Player Flashlight
– Player Laser-sight
– Score System
– Movable creates, boxes to barricade!
– Burping (Yes, the player can also burp!)
– Zombie wave system
– Random Spawn Location
– Next wave display system (with fadeout too!)
– Items pickups such as health, ammo etc.!
-Weapon effects such as sounds, muzzle etc.!
– Pause menu in-game
– Zombies Killer Tracker
– Bullets Fired Tracker